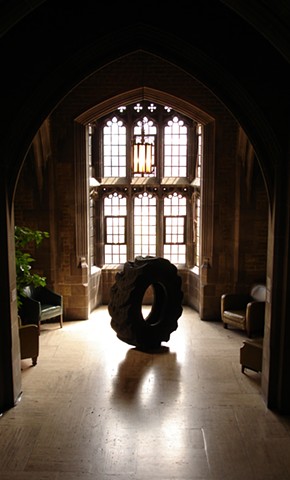 Re-Tread was made for the exhibition hic: Intallations and Interventions Hart House, in which artists were asked to respond to and create site specific work for Hart House, U of T, Toronto.

Re-Tread is a full-sized replica of a tractor tire. However, Lahde has carved the tire tread pattern so that it emulates the neo-gothic carved wood and stone architectural details found throughout Hart House, an iconic Toronto building erected between 1910-1920. Hart House was designed in a neo-gothic style, inspired by the Arts and Crafts movement. The building’s aesthetic emulates the vision of William Morris, and is quintessentially anti-industrial. However, the building was financed by the Massey family and named for Hart Massey who established the family’s fortune by starting an international company that manufactured farm equipment. The tractors and combines produced by the companies Massey-Harris and Massey-Ferguson played a historically significant role in the industrialization of farming across Canada.

Re-Tread brings into stark contrast the seemingly opposing ideologies that inspired the architecture of Hart House and the industry that funded it.